Two Flags at a Prayer March

Do the Christian flag and the American flag belong together?

In the wake of all that has transpired in the United States over the summer of 2020, how are you praying these days?

Last Saturday morning, as Pamela and I picked our way through the crowd toward the Lincoln Memorial, prayer march volunteers handed each participant (and us) two flags.   One a Christian flag, the other the flag of the United States of America.  We held them in our hands as we prayed.

It was fitting.  Franklin Graham issued the call.  “Our nation is in trouble.  Our only hope is God.”

To the early church, Peter wrote “Fear God; honor the emperor” (1 Peter 2:17).  It made me wonder if there ever was a Christian prayer march in Rome at which the body of Jesus begged the Lord for empire-wide revival.  Paul urged Timothy to have his church pray “for kings and all who are in high position” (1 Timothy 2:1-2). 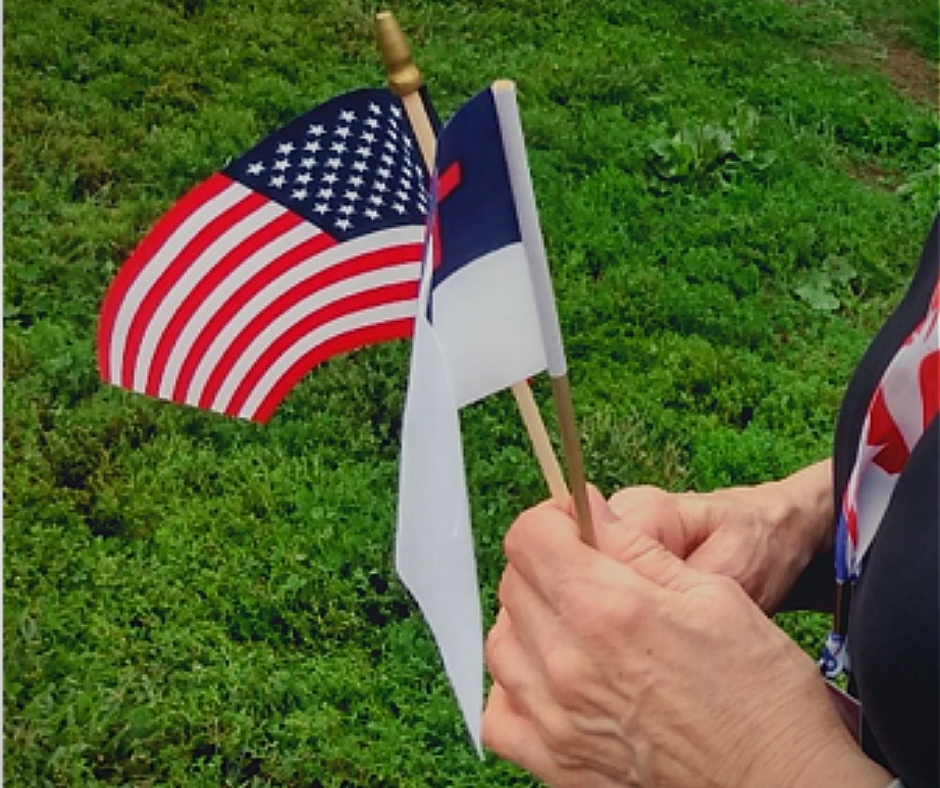 PRAYING WITH THE USA FLAG IN HAND

A nation’s flag communicates what a nation believes about itself, and wants others to know.  The flag of the United States still has 13 red and white stripes, signifying the original 13 colonies which united to birth a country.  In the upper left corner, 50 separate white stars (for the current number of states) united on a field of dark blue.  The colors symbolize the ideals:  red stripes for hardiness and valor, brilliant white for purity and innocence, deep blue for vigilance, perseverance and justice.

These ideals are rooted in the Bible’s call for holiness of living.  Christians know that we are given the pure and innocent righteousness of Jesus by grace through faith.  Lives littered with sin can be made clean and whole by the blood of Jesus.  Transformed lives full of the Spirit are vigilant, persevering in a commitment for what is right.

It is fitting to pray to the God who sovereignly governs all nations for His Spirit to convict us of our straying from purity and righteousness, as well as to renew us together vigilantly persevere in what is just and good.

PRAYING WITH THE CHRISTIAN FLAG IN HAND

Growing up in a Bible-preaching church, I often noticed that there were always two flags on the platform, an American flag and a Christian flag.  The Christian one was noticeably different.

Originally designed in 1897 by Charles Overton and Ralph Diffendorfer, it was first adopted by the Federal Council of Churches in 1942, and subsequently used by a wide variety of Christian denominations and traditions.

It features a bright white field, with a red Latin cross inside a blue canton on its upper left. Once again, white represents purity, innocence, and peace, with a cross red with Christ’s blood on a blue field symbolizing baptism.  Christians are united in Jesus through the forgiveness freely available by faith in the sacrifice of Christ.  We are baptized into His body, and at peace with God and one another, we seek to live out His righteousness.

TOGETHER AT A PRAYER MARCH

Standing in the shadow of Abraham Lincoln, who himself prayed to the God of the Bible for his divided nation, Pamela and I held the two flags.   Admittedly, though the USA is not a Christian nation, our country was birthed by Biblical, Christian truth and ideals.  Like sheep we’ve strayed, turned aside to our own ways.

Yet as Christians, on that afternoon thousands across the country prayed for the God of Scripture to draw all of us to the One Person who alone can reclaim, redeem, and regenerate any repentant heart…and all of us together as a nation.

And His praying body, the Church, does well to be on its knees—in our homes, when we gather as a church, and when we fill a national mall—for the country in which it resides and influences.

These truly are days to pray with two flags in our hands.